After Ukraine’s friends from overseas used the President Volodymyr Zelenskyi’s signature and appointed Valerii Kondratiuk a Head of the Foreign Intelligence Service, they decided to replace the Head of the Security Service of Ukraine as well. Especially considering that Lieutenant Bakanov, who is currently leading the SSU, always triggers Homeric laughter not only among the operational staff but at the U.S. Embassy as well.

It makes perfect sense that American partners propose to bring back Valentyn Nalyvaichenko to the position of the Head of the SSU, who immortalized his name in the history of the once fearsome intelligence service when he lost his wallet at a swimming pool at the Hyatt Regency fitness center in Kyiv. That said, Valentyn Oleksandrovych is respected at the Central Intelligence Agency of the U.S. not for his lost wallet but for his reputation as a person who was being recruited for the U.S. intelligence by the current Head of the FIS Kondratiuk.

Naspravdi.today already recounted this episode from the biography of Kondratiuk and Nalyvaichenko in a piece titled “Biden’s Personal Driver.” In addition to that, we publish an excerpt from a background check, based on which Zelenskyi signed an executive order appointing Valerii Vitaliyovych the Head of the Foreign Intelligence Service:

“V.Kondratiuk and his wife have been working in public service exclusively for their entire lives, and yet, according to a preliminary valuation, V.Kondratiuk is worth over $2M. In particular, according to the state registers, he owns a private house in Konyk gated community, 484 square meters in area and worth approximately $1.5M, and a garage at 10a Staronavodnytska St. Also, V.Kondratiuk is known to have signed over several real properties to his son, including apartment 174 at 46/2 Moskovska St. in Kyiv (worth approximately $300K), two garages in Kyiv, and two land parcels in the suburbs of Kyiv (worth around $100K in total).

According to existing information, while performing military service as a Head of the DI of the MD of Ukraine, V.Kondratiuk repeatedly received illegal benefits from awarding state defence order (SDO) contracts. In particular, in 2016, management of Crypton SIF LLC (an SDO contractor) purchased a new armored Toyota Land Cruiser 200 (АА0634СР license plate; worth around $200K) and handed it over to V.Kondratiuk. Also in 2016, his wife Kondratiuk, T.M., got a gift of a Lexus GS 460 (АА7888КЕ license plate) and purchased apartment 41 at 38/14 Budivelnykiv St. in Kyiv.

It is known that V.Kondratiuk owns a Toyota Sienna (АА8878ІО license plate). It is worth noting that V.Kondratiuk received an illegal benefit (Article 368 of the Criminal Code of Ukraine) in the form of apartment 197 at 3-г Maksymovych St. in Kyiv, which was “gifted” (given as a bribe) by a developer to a close relative (a mother-in-law) after signing a contract with the DI of the MD of Ukraine, represented by V.Kondratiuk, regarding construction on the site at the above mentioned address. It should be mentioned that the mentioned developer sold unfurbished apartments to the DI of the MD of Ukraine, even though the documents read that apartments were renovated.

It is noteworthy that V.Kondratiuk, while holding the position of the Head of the DI of the MD of Ukraine, issued a top secret order and appointed his wife Kondratiuk, T.M., to an officer position at the DI of the MD of Ukraine and to an officer’s rank, which is against anti-corruption laws of Ukraine and constitutes a genuine conflict of interests. It is worth stressing that since 2015, Kondratiuk, T.M., has never showed up at work. KONDRATIUK, Vladyslav Valeriiovych, V.Kondratiuk’s eldest son, studied at a university in Washington, D.C. (the U.S.), where he’d been studying and living for three years that coincided with the tenure of V.Kondratiuk as the Head of the DI of the MD of Ukraine. 75% of expenses were covered by the CIA. KONDRATIUK, Oleksandr Valeriiovych, a middle son, is studying at a private school and lives in New York City (the U.S.). The third son of V.Kondratiuk was born in the U.S. (Miami) in summer of 2019, which automatically makes him a U.S. citizen.”

Given that for a long time, American friends has been keeping the Defence Intelligence of the Ministry of Defence of Ukraine under control, and after appointing Kondratiuk the Head of the FIS, they have added the Foreign Intelligence Service to the list, reinstating Valentyn Nalyvaichenko as the Head of the SSU would make perfect sense.

In Charge of “Exchanges”

Sun Jul 5 , 2020
It took place near Mayorske checkpoint on the contact line next to a young and proud “People’s Republic of Donetsk” two days before the New Year of 2020. Ruslan Baranetskyi, a First Deputy Head of the Security Service of Ukraine, was utterly bewildered by a sight worthy of a military […] 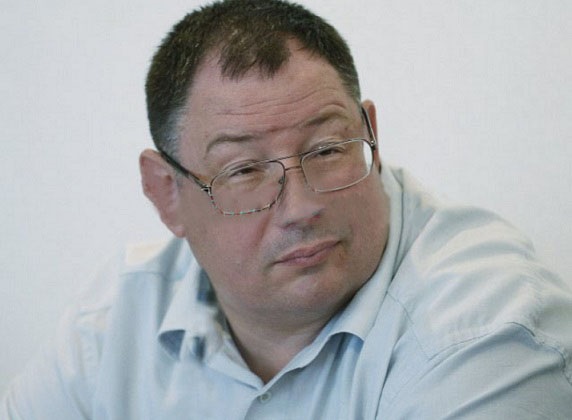