On July 23, 2020 a tragedy took place in Boryspil District of Kyiv Region that shook not only Ukraine but the whole civilized world. The U.S. Embassy in Kyiv mentioned this atrocious event in a special tweet, the European Union and the U.K. raised the alarm, President Zelenskyy delivered a passionate speech, and even the World Bank expressed deep concerns, almost on a par with the ones expressed in February of 2014, when a hundred people were killed in the center of Kyiv.

Even more so, whilst over the past six years the World Bank never called upon Ukrainian authorities to investigate the massacre of protesters and law enforcement officers in the capital of Ukraine, it was the very next day after the incident took place on July 23, 2020 that the World Bank devoted a separate proclamation to this event. Sure thing: as a result of a likely short circuit caused by violation of safety regulations, a house almost burnt down that belonged to Vitaliy Shabunin, a private entrepreneur who for a long time had been registered with the tax agencies as a seller of goods from tents.

However, entrepreneur Shabunin himself assures that no short circuit could have happened, because he called the gas company two weeks prior to the fire, and its representatives didn’t smell any gas indoors. According to Shabunin, this means that electric wires under the wooden porch could not have caused the fire. Therefore, it must have been arson, organized either by the private entrepreneur’s enemies or by his competitors.

To be honest, the arson theory is not very convincing, as Shabunin can’t have any enemies in principle, let alone competitors. You see, Mr. Vitaliy is one of a kind: he praises corruption schemes of Artem Sytnyk, a Director of the National Anti-Corruption Bureau of Ukraine, and he’s unmatched. So what competitors are we talking about? It is even less likely for Shabunin to have any enemies, since no one cares about his dubious earnings. Private entrepreneur Shabunin praises Sytnyk using American taxpayers’ money, and the U.S. Embassy employers are likely the only ones who actually pay attention to his praises—when they prepare reports on the use of funds.

All around the civilized world, civil activists are people who perform community service after work and spend their own money, earned during business hours. In Ukraine, on the other hand, this term has been applied lately to entrepreneurs making money by advertising certain medications on request of manufacturing firms and organizing rallies in support of law enforcement officers caught accepting bribes, selling criminal cases, or embezzling budget funds.

This kind of business is rather profitable, and the story about Shabunin acquiring a private mansion is very telling. In 2012, Vitaliy was even short of money to buy medications for his wife, who suddenly got sick, and was forced to place ads asking for material help.

A short time ago, doctors diagnosed Olena with a serious disease—limbic encephalitis caused by the Epstein-Barr virus plus severe immunodeficiency of unknown nature. The therapy killed the virus, but it had already reached the brain’s limbic system.

Each day in intensive care costs around UAH 1500. A separate item is UAH 30K of immunological therapy. The therapy has already cost $15 000, or all of the couple’s savings. Starting July 3, they’re resorting to borrowed money, and when the total amount exceeds what can potentially be repaid in two years, they will sell their Kyiv apartment.

You can help Olena in one of the following ways:

Good people advised Shabunin to reach out to a certain Dmytro Sherembei, who had thrice served his time for burglary, having spent in penal colonies a total of almost 10 years. After his third time, Sherembei changed careers and became a “civil activist” instead of a burglar; he started making money like he never did before.

Under the direction of an experienced Sherembei, Shabunin quickly registered a firm titled Anticorruption Action Center, and solved all his financial problems already in early 2013. This firm opened 20 bank accounts and basically began providing services of a conversion center, i.e. it converted non-cash funds, wired to its account either by the U.S. Embassy or the International Renaissance Foundation, to cash that was subsequently handed to Ukrainian officials, judges, and law enforcement officers in order to win their loyalty to peaceful foreign and domestic policy of the United States. The clients who were paid by the Shabunin and Sherembei’s firm included a future Prosecutor General Ruslan Riaboshapka;

Oleksandr Karieiev, a future Head of the Second Detectives Division of the NABU;

and Olesia Batryn, a judge of the Pechersk District Court of Kyiv.

Already in 2014, Shabunin bought a land parcel near Boryspil, which he registered in his wife’s name. The land was bought, again, thanks to the generosity of the U.S. Embassy, which paid the professional “civil activist” $23K citing “returning funds stolen by P. Lazarenko to the people of Ukraine.”

Thus, thanks to Pavlo Ivanovych, Vitaliy Shabunin became a landowner. But for some reason, the intellect, honor, and conscience of the freedom-loving people of Ukraine (which is how Shabunin is usually introduced by his mentor, a three-time convicted burglar Sherembei)

chose not to inform the general public about his commercial success. Perhaps it was linked to the fact that in 2015 Shabunin mastered a new line of business and started catering to corruption schemes of Artem Sytnyk, a former head of the investigations division of the Prosecutor of Kyiv Region’s Office, who was appointed the Director of the National Anti-Corruption Bureau of Ukraine. And thus when Shabunin (together with a three-time convict Sherembet, of course) was running for the Civil Oversight Council at the NABU in 2015, he neglected to declare not only the income from leasing his apartment in Sviatoshyn District of Kyiv, not only the expenses for renting a luxury property in the center of the capital, where the professional “civil activist” was actually residing, but also the land parcel bought as a result of “returning funds stolen by P. Lazarenko to the people of Ukraine.”

Actually, Shabunin, being a private entrepreneur, had to submit only those financial statements that were related to his income from “selling goods from tents.” But when his business partners Ruslan Riaboshapka and Viktor Chumak were drafting a law “On the National Anti-Corruption Bureau of Ukraine,” they chose to showcase the whole depth of their intelligence and included a provision that a Civil Oversight Council would be established at the NABU, with regulations to be approved by the executive order of the President of Ukraine (even though the Constitution of Ukraine doesn’t grant him such power). And the regulations on this council say that the candidates to the Civil Oversight Council at the NABU must file the same declaration on property, income, expenses, and financial liabilities that the public officials are required to file.

Sure enough, Sherembei and Shabunin became the first members of the Civil Oversight Council at the NABU. However, Shabunin, when he was filing his declaration, hid the land parcel, hoping that no one would ever find out about this land obtained thanks to Pavlo Lazarenko, as the State Register of Rights to Real Property was not yet open to the public in 2015.

However, in early 2016, a disaster struck—the State Register of Rights to Real Property became open to the general public, and it immediately came to light that Shabunin had hidden his land parcel from declaring.

FROM THE STATE REGISTER OF RIGHTS TO REAL PROPERTY

Current information on the real property

Current information on the right to property

There is no information on registration of other property rights

As for Dmytro Sherembei, a board member of the Anticorruption Action Center firm, when he was running for the Civil Oversight Council at the NABU, he neglected to mention jobs he had in penal colonies each of the three times he had served for burglaries, even though such information was required.

If we take into account that Shabunin and Sherembei were not the only ones who used fraudulent documents to join the Civil Oversight Council at the NABU in 2015—another one was Oleksiy Hrytsenko, a sonny of a never electable colonel, who at that time was a member of the Kyiv City Council, and Article 31 of the Law of Ukraine “On the National Anti-Corruption Bureau of Ukraine” directly prohibited his sitting on the oversight council—then we realize that the Council lost its power, as 8 members out of 15 represented organizations that nominated liars.

Consequently, Ihor Lutsenko, a then Ukrainian MP of the 8th convocation, officially requested the Director of the NABU Sytnyk to fulfil the requirements of the Regulations on the Civil Oversight Council at the National Anti-Corruption Bureau of Ukraine and terminate membership of those council members who provided misleading information about themselves. Sure enough, Sytnyk and rule of law do not mix—the Director of the NABU refused to remove his business partner Shabunin (who hid his land parcel from declaring) from the Civil Oversight Council at the NABU. Ihor Lutsenko filed a criminal complaint with the Prosecutor General’s Office against Sytnyk, but Yuriy Lutsenko, the Prosecutor, for Christ’s sake, General, was very fond of the U.S. Embassy, Sytnyk, and Shabunin at that time, and forbade to register the MP’s complaint in the Unified Register of Pre-trial Investigations.

Then Ihor Lutsenko filed a lawsuit. On June 24, 2016 an investigative judge of the Pechersk District Court ruled in case 757/30101/16-к and ordered the Prosecutor General’s Office of Ukraine to open a criminal proceeding against Sytnyk in response to Ihor Lutsenko’s complaint, but the Prosecutor, for Christ’s sake, General refused to comply with the court’s ruling.

Then emboldened Shabunin, having seen that the laws do not apply to him and Sytnyk, began constructing a house on the land parcel he had hid from declaring. He quite possibly again used the money obtained thanks to Pavlo Lazarenko.

But if the laws passed by the Ukrainian parliament indeed do not apply to professional “civil activists,” the laws of physics do not make any exceptions. Which was basically proven by the fire in Shabunin’s mansion. Nevertheless, there is little doubt that the U.S. Embassy is going to find funds to provide Mr. Vitaliy with decent housing. I mean, what’s so great about a one-story house? More land would not hurt either. The important thing is that Shabunin shouldn’t forget to shout about how corrupt people, terrified of his friendship with Sytnyk, attempted at his life. Then the economic well-being of the professional “civil activist” will be all but guaranteed.

Tue Aug 11 , 2020
On August 5, 2020 a head of state Andriy Yermak used V.Zelenskyi’s signature and issued Executive Order 307/2020 firing Vasyl Burba from a position of a Head of the Defence Intelligence of the Ministry of Defence of Ukraine. The process of sacking Burba extended over a year and a half. […] 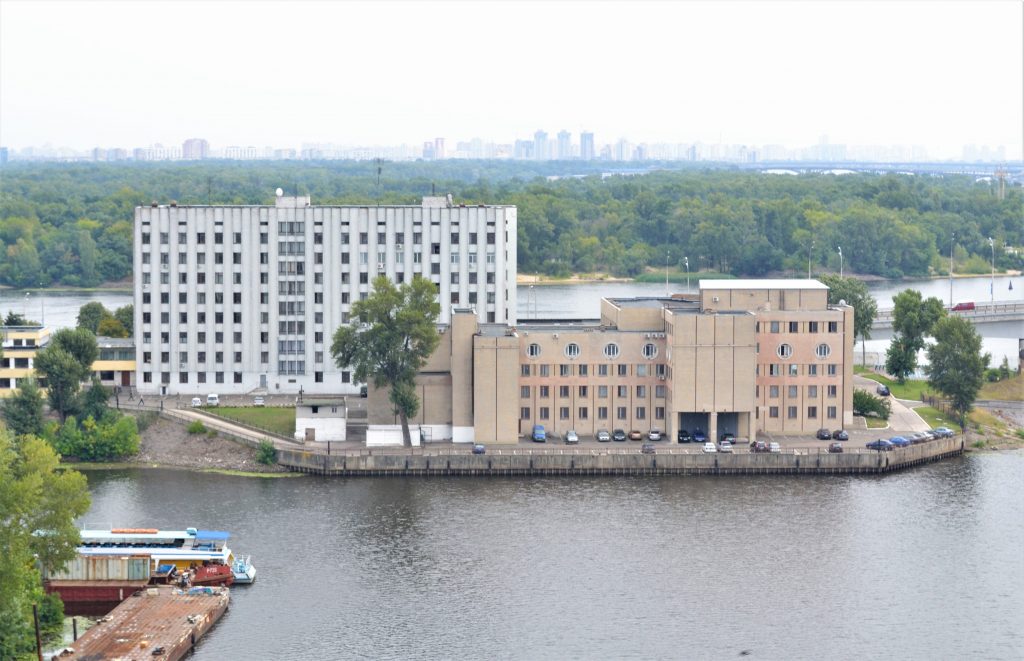