Corruption that has corroded the National Anti-Corruption Bureau of Ukraine is an epidemic worse than coronavirus, which has been attested by the case of Andrew Favorov—a second-in-command at Naftogaz of Ukraine NJSC—who, for the time being, has self-quarantined due to getting COVID-19. Favorov, a citizen of Russian Federation and the U.S., caught this virus overseas, which on March 20, 2020 was revealed by his father Mikhail Favorov (by the way, an epidemiologist by occupation) on Echo of Moscow.

“While I was in Turkey, my son stayed here at our home, in Atlanta, and then flew to Ukraine for work. He works in Ukraine. We cannot say precisely, in which of the two planes, in which airport or where he caught the disease, but he arrived to Kyiv on Wednesday, and on Saturday, he felt sick, felt feverish; he took the temperature, it was around 38 centigrade, and this characteristic dry cough started, like barking.”

Scared Favorov Jr. took the test that confirmed coronavirus infection, and a day hence, his wife got sick as well.

In fact, the reason for Andrew Favorov’s condition is not pandemic per se, but rather his love of Artem Sytnyk’s money (Sytnyk is a Director of the NABU). Under direct supervision of the latter, for almost a year now, from March 20, 2019 detectives of the National Anti-Corruption Bureau of Ukraine have been conducting a pre-trial investigating within a criminal proceeding 42019000000000611, registered by the Special Anti-Corruption Prosecutor’s Office on the basis of a criminal offence under Part 5 of Article 191 of the Criminal Code of Ukraine—regarding grand theft of state funds by Favorov.

Anyway, in November-December of 2018, this Gas Supply Company Naftogaz Trading sold 101 million cubic meters of gas to another subsidiary of Naftogaz of Ukraine NJSC—Ukrtransgaz JSC. But what a surprise: it sold the gas not directly but using a “middleman”—a private ERU Trading LLC. At that, ERU Trading received gas from the state company Gas Supply Company Naftogaz Trading at a discount, but resold it to the state company Ukrtransgaz at a regular price, “making” USD 2.2M in profits just by doing a little paperwork (because trading gas located in storages is nothing more but exchanging documents). But miracles don’t stop even here: at the time of entering a gas sale contract, that very Favorov was an owner of ERU Trading LLC, and left the “middleman” only to get appointed a Head of the Integrated Gas Business of Naftogaz of Ukraine NJSC in December of 2018, and to head the Gas Division of this company and—in combination—UkrGasVydobuvannya JSC in January of 2019.

Let’s ponder: how much time does a detective of the NABU need to send files in criminal proceeding to court, along with an indictment against Favorov and a director of Gas Supply Company Naftogaz Trading LLC? Two months would be more than enough, because one needs to investigate only the fate of those very USD 2.2M that were left in the account of ERU Trading LLC after selling gas by one state company to the other one. Well, there are only two possibilities: either the money was transferred to a conversion center and encashed afterwards, or it was transferred to an offshore account.

To conduct investigation and send the case files to court, a detective of the NABU would only need to carry out the following steps:

And now let’s see what the NABU managed to investigate over the course of this year.

As was expected, instead of investigating gas trading, the NABU only engaged in passing gases and imitated lots of activity. In particular, the Unified State Register of Court Decisions doesn’t contain a single decision by an investigative judge within this criminal proceeding. In other words, Volodymyr Vitkovskyi, a senior detective of the First Detectives Division of the NABU, who investigates this extremely complicated case, didn’t apply a single request to the court. And the only investigative action carried out by Volodymyr Stanislavovych was sending a letter to Naftogaz of Ukraine NJSC in April of 2019, in which he asked, in an act of out-of-court communication (i.e. without an investigative judge’s decision granting temporary access to documents), to send copies of gas trading agreements between subsidiaries to the NABU. And he rested his case there.

However, a recent scandal involving bugging offices of judges of the Kyiv District Administrative Court by Sytnyk’s subordinates attested to the fact that there are people, not necessarily with big names, who can put in a good word with the NABU for Favorov. In particular, it can be concluded from the released wiretaps that Andriy Fedorchuk, one of the KDAC judges, covertly cooperates with the National Anti-Corruption Bureau of Ukraine. Moreover, Fedorchuk is the very same judge who, in his decision of February 2, 2017, prohibited the State Tax Service from enforcing collection of UAH 137.7M of tax debt from Favorov’s Energy Resources of Ukraine company (ERU Trading LLS is its “subsidiary”), citing harm to company’s economic activity that could be potentially caused by paying the taxes.

However, the most likely reason that nudged honest and incorruptible Sytnyk to impede investigations of Favorov’s scams is Artem Sergiyovych’s craving for currency. At the very least, if a person has been taking bribes on a regular basis for 10 years of his tenure at the prosecutor’s office, there seem to be no reason as to why he would stop doing so after having been appointed a Director of the National Anti-Corruption Bureau of Ukraine.

Had Sytnyk not pursued fresh money and not prohibited detective Vitkovskyi from notifying Favorov of suspicion in embezzlement, the Head of the Integrated Gas Business Division would have been in the dock, would have not been able to go home overseas, and would have not put at risk neither his own life nor life and well-being of other employees of Naftogaz of Ukraine NJSC.

Tue Mar 31 , 2020
On March 29, 2020 Geo Leros, a Ukrainian MP (“People’s Servant” faction), published epic videos on his Facebook page that were recorded in August through October of 2019 with a hidden camera during heart-to-heart conversations involving Denys Yermak, a brother of the current Head of the Office of the President […] 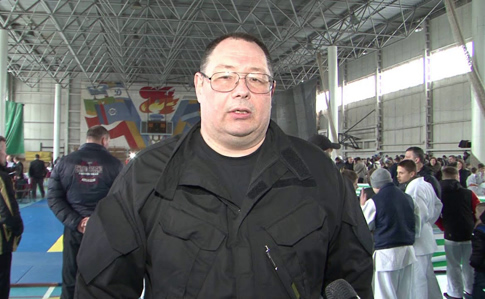