A conflict flares up between Iryna Venediktova, the Acting Director of the State Bureau of Investigations, and David Arakhamia, the Head of the Faction of the political party “Servant of the People” in Verkhovna Rada of Ukraine. The scandal became public on January 20, 2020, after Arakhamia argued on the “Freedom of Speech” show on ICTV channel against appointing Oleksandr Babikov, a lawyer from Kharkiv, a First Deputy Director of the SBI.

“If you are asking for my personal view, I’m strongly against it… I will be strongly opposing this decision,” claimed Arakhamia, adding that this was just his personal opinion. The faction of “Servant of the People” will come up with a unified take on Babikov’s appointment after discussing this issue at the faction meeting.

Obviously, neither Arakhamia’s opinion nor the faction’s decision will in any way influence fates of Babikov and Oleksandr Sokolov, another Venediktova’s deputy, who had been appointed after a fictitious contest. However, the real reason behind the conflict between Venediktova and Arakhamia is peculiar. According to sources in the Office of the President of Ukraine, the real bone of contention is not Babikov, who gets scolded by reporters for being Yanukovych’s lawyer and representing his interests in Ukraine after the latter had fled the country (actually, there is nothing wrong here, it is precisely a lawyer’s job to provide paid legal services, and citizen Yanukovych has not been stripped of his right for legal aid), but rather the situation around Sokolov. More precisely, that Venediktova demanded from Arakhamia to curtail the activities of the Temporary Investigative Commission of Verkhovna Rada of Ukraine on Investigations of Fires (Blowups) at the Arms Warehouses in Ichnia (Chernihiv Region), Kalynivka (Vinnytsia Region), Balakliya (Kharkiv Region), Svatove (Luhansk Region), Kryvyi Rih (Dnipropetrovsk Region) in 2014–2018.

This parliamentary TIC was established on October 31, 2019 in order to conduct parliamentary oversight over probes by the law enforcement agencies into circumstances and causes of numerous blowups at the arms warehouses. David Arakhamia is the head of this Temporary Investigative Commission.

And thus while TIC was working, information came in that fires at the warehouses were organized not by Russian saboteurs as was being told by Yuriy Lutsenko, the Prosecutor, for Christ’s sake, General, but by members of “Sarmat” special unit of the Ministry of Defence of Ukraine, with the intent of concealing the shortage of ammunition.

In particular, within the course of the pre-trial investigation in the criminal proceeding regarding the March 23, 2017 blowup of the Ukrainian Armed Forces 65th Missile and Artillery Arsenal (military unit А1352) in Balakliya, Kharkiv Region, it has been found that servicemen of “Sarmat” special unit planted an explosive inside and outside the arsenal, disguising it as fire extinguishers. After that, in violation of a written order, they left the arsenal and came to the military unit in Malynivka village, Chuhuiiv District, Kharkiv Region. And only after the storages of missile and artillery ammunition had been blown up, servicemen of “Sarmat” special unit returned to Balakliya with the intent of creating a fake alibi.

As has been found within the course of the pre-trial investigation and reported to president Poroshenko, the main motive for blowing up the 65th arsenal was concealing from the audit the fact of looting of about UAH 560 mln worth of ammunition. The shortage was revealed by a preliminary audit report 234/1/13/31 of February 28, 2017. Central Missile and Artillery Department was to provide appropriate explanations and documents by March 30, 2017, but the arsenal blew up on March 23, 2017. Having found out the real causes of the fire at the 65th Missile and Artillery Arsenal in Balakliya, Poroshenko ordered to stop any further investigations.

While the Temporary Investigative Commission was examining the information provided by the law enforcement agencies, the Acting Director of the SBI Venediktova approached Arakhamia and ordered him to end investigations and curtail the activities of the commission. The reason is that the Deputy Director of the SBI Oleksandr Sokolov is not only Venediktova’s business partner (Sokolov’s wife works at the Peregrin Capital Group Limited founded by Venediktova’s mother-in-law Nataliia Kolesnyk) but also served until January 17, 2020 in the Kharkiv Regional Department of the Security Service of Ukraine (he headed the counterintelligence division, and lately was the Deputy Head of the Department) and was directly linked to concealing information about true causes of blowing up the arsenal in Balakliya.

Moreover, efforts of the TIC headed by Arakhamia jeopardize the Head of the Investigative Division of the Kharkiv Regional SSU Department Rusynov, who not so long ago saved Venediktova and Babikov from serious troubles related to involvement of this duo in activities of a smuggling gang. A post of the First Deputy Head of the Kharkiv Regional SSU Department is already bought for Rusynov, but if the truth about fires at the arms warehouse in Balakliya goes public he might move for several years to the detention center and correctional facility in Mokoshyne village.

Arakhamia, the Head of the TIC, reacted to Venediktova’s demand rather violently. And that’s understandable, as the SBI has no business investigating fires at arms warehouses and never had. Thus, we are looking forward to new developments in the scandal: perhaps, Sokolov and Babikov will prepare an adequate response and, say, leak to the media information about informal relations between Arakhamia and American special service representatives.

The First Crime Committed by “My New Police” Turns Four

Sat Feb 8 , 2020
Four years ago, on February 7, 2016, a patrol police officer Serhiy Oliynyk shot dead a minor Mykhailo Medvediev with a service gun in Kyiv. Medvediev’s only “fault” was that he was a passenger in a car whose driver committed an administrative offence. Enraged polizeien embarked on a real manhunt, […] 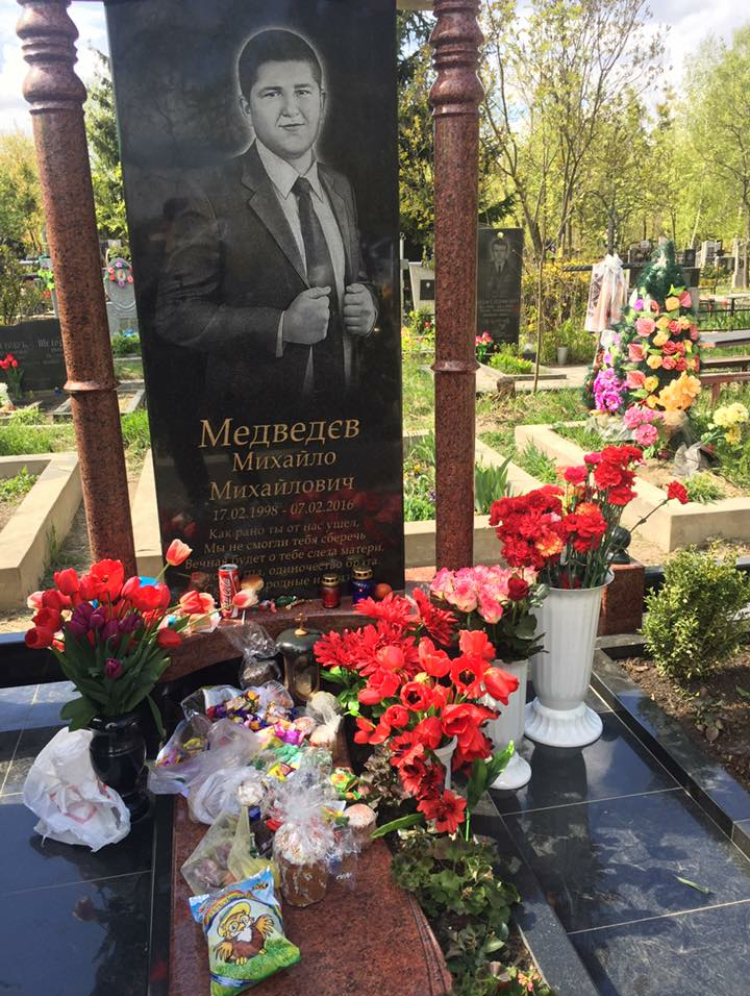